Antibody Structure: All You Ever Wanted – and Needed – to Know 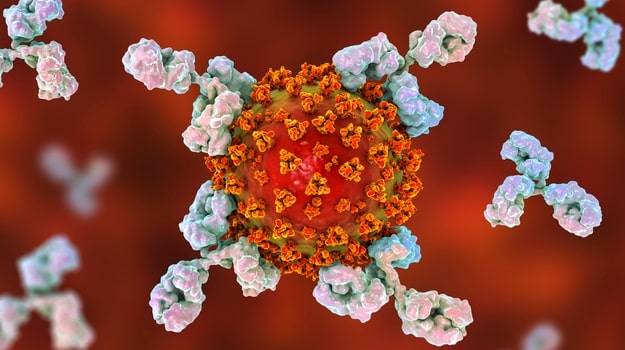 Antibody. A word that perhaps you always knew but didn’t really know, and now is the difference between getting back to normal or remaining perpetually locked down. So what exactly is an antibody, what is its structure and what is its therapeutic potential?

What is an Antibody?

Simply put, an antibody is a large, Y-shaped blood protein produced by plasma cells that the immune system uses to take down pathogens like bacteria – and of course, viruses like SARS-CoV-2. They are produced by B cells, which are those white blood cells doctors always want to make sure are plentiful in the body.

This is for good reason, as the antibody has a special ability to recognize a unique molecule of the pathogen, called an antigen, and bind to it. Using this binding capability, the antibody can tag a pathogen for destruction or enlist another part of the immune system to do so, and each antibody has a different superpower – allowing it to target a different pathogen.

What Part of an Antibody’s Structure Determines its Class?

There are five classes of antibodies – also known as immunoglobulins (Ig) –  all of which play a vital role in supporting cellular immunity. They are known as IgG, IgM, IgA, IgD, and IgE and are distinguished by the type of heavy chain found in the molecule.

“Differences in heavy chain polypeptides allow these immunoglobulins to function in different types of immune responses and at particular stages of the immune response. The polypeptide protein sequences responsible for these differences are found primarily in the Fc fragment,” explained Dr. Patrick Soon-Shiong, world-class bioscientist and executive chairman of ImmunityBio.

Accounting for approximately 75% of the body’s antibody makeup, IgG, which is secreted by plasma cells in the blood, has two weapons on hand. Depending on the antigen it is waging war against, it can either take a direct approach, instigating the release of toxins to destroy a microorganism, or tag a pathogen for destruction by other immune cells and proteins.

This warrior is found in mucous, saliva, tears, and breast milk, and accounts for 15% of the antibody family. IgA protects the body against pathogens like viruses, bacteria, fungi, and parasites, and prevents them from sticking to the epithelium, which lines all of the body’s tissues.

In its battle to protect the body, IgA is likely to bring along its buddy, IgM, a frontline worker which helps to ignite other antibodies and immune cells. A subset of IgM plays another special role – helping the Memory B cell to recollect a pathogen after it has been destroyed, thereby responding more quickly if the body is re-exposed to it.

IgE is the antibody you might notice right around now as it triggers an allergic response to springtime allergens – and others. White blood cells called Basophils and mast cells break open and release histamine – triggering a trip to the local drug store for an antihistamine.  But wait – it does something to be happy about too! When it isn’t causing allergic reactions, IgE helps to protect the body against parasitic infections.

Probably the most important first responder, IgD binds to B cells to cause the immune response. Then, IgD sends the bat signal to IgM to come out and fight the infection.

The Therapeutic Potential of Antibodies

With so many varying functions in the body, it makes sense that each antibody has the potential to make a difference in the development of medicines, some more than others.

“IgG is the most prevalent, comprising around 75% of antibodies and is most frequently the class of antibody used for monoclonal antibody-based therapies, such as immunotherapies for cancer. The greater abundance and longer half-life in serum allows for IgG to be a dominant player,” said Soon-Shiong. “IgG isotypes activate complement, which leads to antimicrobial function, and are transferred through the placenta, providing protection for a fetus. Most of the isotypes bind to Fc receptors, which leads to the killing of antibody-coated cells, a function that is exploited using therapeutic antibodies and ImmunityBio’s haNK cells for antitumor activity.”

With its basis in the mucosa and saliva, IgA plays an important role in the treatment of COVID-19.

“For COVID, both IgG and IgA are desired. Once again, IgG is most prevalent in the serum, so its high concentration and ability to bind a protein-like spike makes it beneficial. At the same time, IgA in the mucosa, places like nose, lungs where SARS-CoV-2 enters the body, would be of great benefit,” explained Soon-Shiong, whose company, ImmunityBio, is developing a COVID-19 vaccine designed to elicit both an antibody and a T cell response.

On April 8, ImmunityBio reported optimistic initial data from a Phase I study showing that the Prime hAd5 vaccine induced a 10-fold increase in T Cell response equivalent to T cell responses from patients who had recovered from SARS-CoV-2 infection.

Science has come a long way in terms of understanding the structure and correlating potential of antibodies. Soon-Shiong explained why this field of knowledge is so valuable from a therapeutic perspective.

“Knowledge of structure allows optimal use of whole antibodies, antibody fragments, bispecific antibodies, and antibody fusion products. The effects of these molecules can be enhanced by humanization, affinity modulation, and stability enhancement,” he said.

The Role of Antibodies in Cancer Research

Recently, a team of scientists at the Salk Institute revealed a novel form of antibody binding, defining how antibodies can recognize a compound called phosphohistidine, an extremely unstable molecule that plays a central role in cancers of the liver, breast, and neuroblastoma – a particularly devastating disease primarily affecting young children.

The research will also enable scientists to design more efficient antibodies by manipulating the shape and atomic makeup of the antibodies’ binding sites.

“We are excited that these new antibody structures reveal novel principles of antigen-bindingm" said Dr. Toby Hunter, the paper’s senior author and Renato Dulbecco Chair and American Cancer Society Professor at Salk. "Now we can redesign these antibodies and engineer their properties to make them more efficient.”