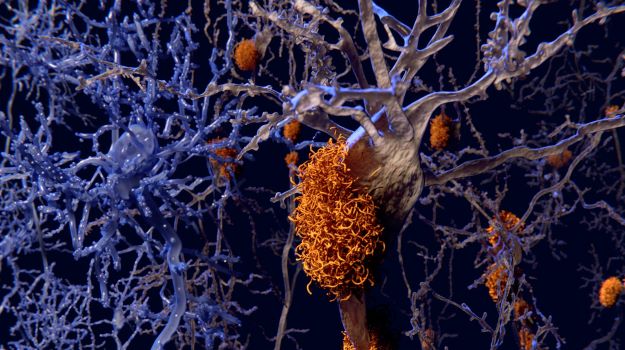 A major milestone in the development of Alzheimer's disease treatments is the uncovering of amyloid fibrils as a possible pathogenic step. The growth of fibril tips is thought to be the 'Achilles' heel' of the process.

Fibrous protein aggregates called amyloid fibrils are linked to multiple incurable diseases such as Alzheimer's and Parkinson's. Researchers have long suspected Alzheimer's disease to be caused by amyloid plaques. The dysregulation of the amyloid-beta (Aβ) level leads to the appearance of senile plaques which contain Aβ depositions. There are currently no drugs that treat Alzheimer’s that do more than delay symptoms like memory loss.

On Monday, researchers at the University of Houston and at Rice University announced their discovery that amyloid beta peptides, small molecules abundant in the brain, go through several distinct stages before docking and locking to growing fibrils. They shared their theory on how it might be possible to slow their growth.

As proteins fold, they tend to look for the most straightforward route to their functional forms. Amyloid beta peptides also bind to growing fibrils in search of the easiest way but get frustrated when their positive and negative forces fail to align.

As they align, the growing fibrils form the so-called gummy plaques that are associated with Alzheimer’s and other neurological diseases. Research shows that drugs could be developed to utilize peptides' frustrated intermediate states to stabilize fibril tips and slow further aggregation.

Scientists are now looking at ways to prevent the growth of fibrils at their tips since evidence suggests frustrated, disordered peptide chains try to dock and lock at the end of each fiber. These peptide chains are druggable targets.

“It’s irrational to block every single peptide because there are probably 100,000 times more of them than there are fibril tips," said UH Chemical and Biomolecular Engineer Peter Vekilov. "The beauty of what we found is that the fibril tip is an Achilles' heel of fibrilization, and all we have to do is block the complex at the tip."

It may be possible to stop amyloid beta aggregation by stopping fibril growth at their tips without affecting the whole fibril, the researchers added.

There are other research programs and trials underway at pharmaceutical companies to scrutinize the amyloid aggregation process in hopes of finding new drug targets for Alzheimer’s and related diseases.

Eisai's lecanemab is one such anti-amyloid beta protofibril antibody, as is Eli Lilly and Co.’s donanemab which targets N3pG, a modified form of beta amyloid.

Donanemab has shown significant slowing of decline in a composite measure of cognition and daily function in patients with early symptomatic AD. At the end of June, the U.S. Food and Drug Administration (FDA) granted breakthrough therapy designation for these two investigational antibodies.

Lilly is also conducting research on solanezumab, an investigational anti-amyloid monoclonal antibody in the Anti-Amyloid Treatment in Asymptomatic Alzheimer's (A4) Study. The A4 Study is a clinical trial testing solanezumab in older individuals who have evidence of amyloid in their brains but do not show symptoms of memory impairment.

Another study has shown that treatment with either solanezumab or gantenerumab, another monoclonal antibody, did not slow down cognitive decline in people who have a type of early-onset dementia called dominantly inherited Alzheimer’s disease (DIAD).

Solanezumab was put on the backburner and Eli Lilly let go of 485 employees at its US-based Alzheimer’s unit in Indianapolis.

Incidentally, donanemab appears to have found a new lease of life with the FDA approval of Biogen's Aduhelm, the first new treatment to be approved for Alzheimer’s disease since 2003.

As part of its accelerated approval process, the FDA cleared Aduhelm on June 7 using its "fundamental pathophysiology" approach. Since previous Alzheimer's drugs approved by the FDA only aim to alleviate symptoms instead of slowing the progression of the disease, this drug is intended to slow cognitive decline.

Aducanumab clears out clumps of a protein in the brain called amyloid-β, which some researchers think is the root cause of AD. This theory is known as the amyloid hypothesis. The FDA approved the drug based on its ability to reduce the levels of these plaques in the brain.

The launch, however, is facing some near-term challenges. Aduhelm also comes with a hefty price tag of $56,000 a year.

Alzheimer's disease affects more than six million Americans, placing a heavy burden on the US healthcare system. The Institute for Clinical and Economic Review (ICER), a cost watchdog, believes the drug should cost no more than $8,300 per year.

Biogen is reportedly providing the much-debated Aduhelm free of charge for some patients as it awaits claim reviews by Medicare.